skip to main | skip to sidebar

David Stern is a giant piece of shit... 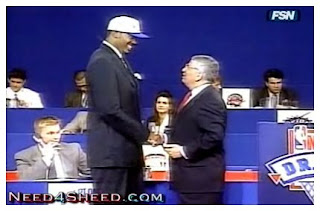 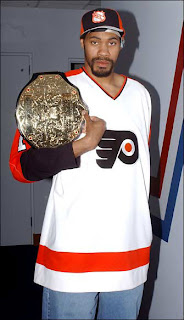 Maybe I am biased, or just maybe I care too much about the Detroit Pistons. Anyway I try to rationalize it in my head it comes out the same. The NBA is completely fake and David Stern is the equivalent of Vince Mcmanon. Not only is he a total pagan corporate whore, he is also oblivious to making wise decisions with whom he elects as basketball Gods. I think the downfall of the league came around the time of the Michael Jordan era. I am not in any means trying to take away what MJ did, he TOTALLY earned his legacy and iconic status. But after he left, Stern started handing the keys to the league to any 18 year old with some hype. He forgot that great players take time to become stars and quality basketball has nothing to do with marketing. Stars make them themselves and as a league they should focus on the teams/players that win, bottom line. Rules have been modified year after year to ensure that players that he picks as the next big thing will have an easier time rising to the top. Lost in his tweaking of the rules and force fed new stars is what everyone really loved. Real basketball. The refs control everything, momentum is shifted the second an "NBA/Media darling" is getting pummeled. Players that can actually defend, hit a 17 foot jumper, hustle, play with emotion are hastily brushed aside for the next big thing. I watch the old footage of what the NBA used to be like and I am overwhelmed by the passion and quality of the game. Now, I have to sit through a predestined marketing scheme that teeters so close to obvious I can barely stand to watch as I already know the outcome. It is exactly like wrestling, every now and then a new villain is created to crush the hero only for the hero to have his triumphant title. So David Stern I hope bad karma attacks every facet of your shitty devious life. As for my man Sheed, you are dead on and maybe the only player in the league that has the balls to call it like it is, I can only wish you and the Stones can overcome the Celtic slight of hand and win this thing. And if you do, it's only going to get worse, Kobe is loved again...
Posted by the blog cabin at 5:23 PM No comments:

Things that make me want to punch myself in the face...

I drank a lot last night, thus I have been laying on the couch all day like a beached whale, quietly crying inside while I have my eyes and ears brutally raped by television. Which brings me to this, a vehement tirade that only comes from watching TV for 12 hours. Let's get right into it.

1. Ultimate Fighting. I will admit that I like watching grown men beating the shit out of each other. It is entertaining and easy to get into. But I swear people have already taken this shit too far. I know at least 5 guys that are "training" in hopes of becoming an ultimate fighter. I see them getting trashed at the bar wearing their stupid fighter gear (Under Armor, Tapout, excessive screen print white trash tribal shit) coupled with fighter haircuts (mohawk or faux hawk) picking fights anyone that invades their turf. I hate these dudes and their tan trashy chicks with their bud-lite blue eyes. Don't breed.

2. Tiger Woods. You have done an amazing job hiding the fact that you are a robot. Congrats. But do you really need more endorsements? You are a billionaire, you can let a few things slide and not plaster your name on everything. Does the world really need Tiger's own line of performance drinks? Couldn't you just have your own flavor like Jordan did with Citrus Cooler (btw it was totally solid)? But noooooo Gatorade thinks Tiger should have an entire product line. What is next? Tiger tampons? I can almost visualize the commercial. "Tiger tampons, when you need a hole in one every time"

3. I saved this asshole for last. I hate this guy and I want to fight him. I feel like he is personally taking a potato peeler to my eyes every time I see this. If karma and reincarnation really exist this dude should come back as a deformed male prostitute where he is forced to service mutant Chernobyl victims. That would be almost fair. Almost.
Posted by the blog cabin at 8:53 PM No comments:

There will be blood... 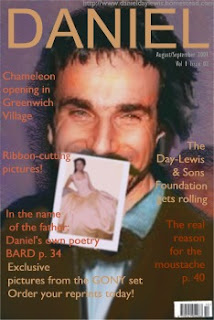 Holy shit. I know I might be a little late on this but who cares. I watched "There will be blood" today and I have come to a conclusion. Daniel Day Lewis is completely batshit insane and I love it. The movie as a whole wasn't what I expected, it was like they tricked Daniel into thinking they were making a movie. But really it was a 3 hour long chance for the film maker to video tape Lewis basically being himself. I am willing to bet that there wasn't even a script. I wonder if the scene where Lewis kills the guy with a bowling pin is real. That's how convincing Lewis is. Man that dude is sweet...
Posted by the blog cabin at 8:42 PM No comments:

I love Detroit sports. That being said I have to vent about this. I already loathe the Fox network and the giant slop of programs they pollute to the world, but this is too much. Who the fuck thought to themselves that this is good? Whoever green-lighted this commercial needs to beaten with wet leather belts until their skin melts off the bone. This song sucks, the dude with the goggles is a nauseating douche bag, and they play this thing NON-STOP. I cant take it. And to salt my wounds the Tigers are complete shit. April in the D!
Posted by the blog cabin at 8:33 PM No comments:

In the tradition of bass pioneers such as DJ Magic Mike, Poison Clan, MC A.D.E., DJ Assault and basically anyone with an insane amount of bass I have embarked on a weekly mission to record (by record, I mean torture ears) a bass tribute album that encompasses many different eras of bass. With the help of a silent partner (by silent, I mean he is too ashamed to be named) we have recorded 2 full tracks of speaker ripping trash. Tentatively titled "2000 and Bass" this album should invoke memories of a time much simpler. Kenwood, Alpine, Kicker, and Rockford Fosgate ruled the inside of hatch-backs throughout my youth and I intend to give this place in time its overdue homage. I will posting the title track shortly so stay tuned in.
Posted by the blog cabin at 2:22 PM 1 comment:

return of the blog.. 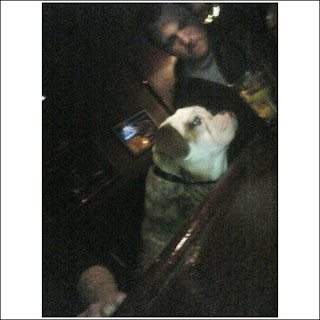 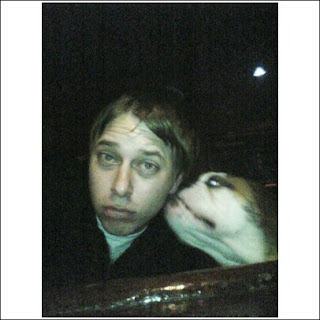 Yeah, yeah, yeah...It's basically been forever since I have posted a blog and I really don't have a solid excuse on why but I figured this is totally worthy of a new post. After a night of football and food, I found myself in my local watering hole (The Alley Bar) last night for a couple drinks. The bar was pretty empty as temperatures were in the single digit area in Ann Arbor and without some locals to socialize with I nearly packed it in, settling for an early night. Fortunately I chose to stay a tad longer as my night would get uniquely better. The door opened pushing a fresh wave of faces and icy air. A guy named Jeff and his dog "Caster" pulled up some stools right next to me. Caster sat stoically in his stool and ordered a whiskey and water in a bowl as Jeff and I got through the getting to know yous. After a few rounds in us the time had came for shots. "Puppy Shots" flowed as Caster and I lapped away at our respective bowls. Caster was pretty much the best bar buddy I have ever encountered as we drank and discussed a wide range of topics ranging from politics, football, and bitches. Many "Puppy Shots" had been tucked away into our livers and it finally took its toll on the young lad as he passed out at the bar. Goodbyes were said and kisses exchanged as we went about our separate ways into the winter night.
Posted by the blog cabin at 10:58 AM No comments:

If you want to destroy my sweater... 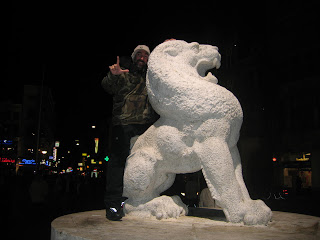 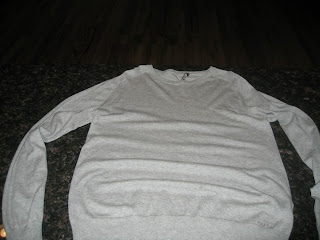 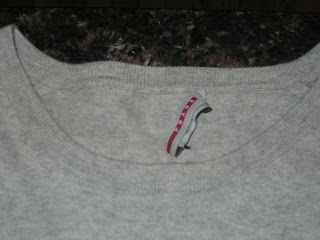 It's starting to smell rotten in Denmark. What started out as a simple dry cleaning has turned into potential war. Back in July while working with my comrade Marc Labelle in Pasadena, I had dropped off my sweater (see photo) into the hands of the Ritz Carlton. The next day I received my sweater folded nicely on my bed only to realize they had manhandled it. It had been reshaped to fit an oompa loompa and the tag had been torn. Heartbroken that my prized cashmere dream had been shattered I turned to help of Mr. Labelle. Marc being the diplomat when it comes to negotiations with hotel concierges I figured my loss was safe in his hands. After a meeting with our liaison in the concierge room I felt relieved by their offer of a gift certificate to replace my magical sweater. Situation resolved, so I naively thought. Months fly by and the nights get cooler which brings me to today. As I scroll through my closet looking for a warm sweater to break the chill of what finally feels like fall I stumble upon my old pal. Immediately my heart and soul is filled with anger and sorrow over the inability to wear that comfy staple. To make matters worse (as if they could possibly be) I still have not received my promised gift certificate. This is where it gets weird. As I am pining in my closet the phone rings, it's Marc and he is repeating the word sweater with an ominous tone. We talk briefly about the usual and he says he is still working on my gift certificate. I am starting to think this was all a sinister plan by Labellicus to strip me of my cashmere armor and toy with my spirit. I am going to put some thought into the dialogue of events and if they add up it means one thing. WAR! Hope you are ready you old warrior.
Posted by the blog cabin at 2:01 PM 1 comment: